Starling Bank saw a new opportunity to deliver tax services to small businesses under the UK “making tax digital” initiative, and engaged with Infinity Works to increase their cloud-native engineering capacity on AWS to take advantage of the opportunity.

Starling Bank saw a new opportunity to deliver tax services to small businesses under the UK “Making Tax Digital” initiative. Starling Bank engaged with Infinity Works to increase their cloud-native engineering capacity on AWS to take advantage of the opportunity. This has resulted in thousands of small businesses having a better experience of managing their accounts and meeting tax requirements.

Starling Bank is a challenger bank operating in the UK financial services industry. Their banking platform is unique in that it is developed in-house, with their core banking platform not dependent on 3rd party banking systems. They are a digital-first bank, offering service primarily via digital channels and not operating any physical branch locations.

The UK Government felt that small businesses were not being adequately served by existing banking platforms, and also wanted to migrate existing paper-based tax processes into digital channels under a scheme called “Making Tax Digital”.

Funding was made available for organisations to produce systems that meet these goals, Starling Bank saw this as an opportunity to benefit customers and to reduce the costs associated with launching a new financial services product.

Starling Bank’s vision was to deliver an integrated suite of tools that provides online VAT returns, small business invoicing and business tax returns. In line with Starling Bank’s product vision, these services would make use of automation to provide the best customer experience. Had Starling Bank not taken the opportunity, they would have lost the unique selling point of being able to offer these digital services to small businesses, potentially losing out to competitors.

The AWS ecosystem provides engineers with a standard set of tools, these reduce the time to value when creating new products on AWS.  Finding staff is made easier, because AWS skills are readily available due to their widespread use and the availability of accessible training and accreditation programmes.

Starling Bank wanted to take advantage of the opportunity that presented itself, while continuing to develop their core platforms. To extend their engineering capabilities to develop the service without impacting core development, Starling Bank sought out a partner.

For organisations that are born digital, finding suitable technology partners can be challenging, due to their cutting edge technology, user centric design techniques and agile ways of working.

Having previously worked with Infinity Works to build infrastructure and services, Infinity Works had built up a reputation within Starling Bank for strong full-stack delivery capability, technical excellence, and financial services industry knowledge. This made Infinity Works a suitable choice for the project.

To ensure high quality outputs and to be able to manage the deliverables from external teams, technical and cultural alignment is extremely important to Starling Bank. Infinity Works works has a customer-first approach and focuses on working well with other consultancies to benefit the customer. There is a mutual respect between Starling Bank and Infinity Works which makes for a great working relationship.

Infinity Works developed lightweight prototypes to think through how the solution could work in practice. These prototypes were used to validate the design from a regulatory and legal standpoint, ensuring that time wasn’t wasted creating something that was not fit for purpose.

Infinity Works then proposed the creation of a lightweight MVP, to prove the concept, initially using a small product team of 3 full-stack engineers, capable of delivering a wide range of capabilities, from mobile user interfaces to cloud infrastructure.

Starling Bank had an existing technology stack in place focussed on Java-based microservices with JavaScript user interfaces built using the React framework. This was seen as a good choice for the requirements, and was adopted for the project.

Docker Containers are a great way to deploy and run Java applications, and fit well into a Continuous Integration (CI/CD) pipeline. With this in mind, Infinity Works proposed the use of Kubernetes to run the Docker containers due to its high performance and scalability. This was encouraged by Starling Bank who saw adopting Kubernetes as being a strategic goal, to increase their compute density and improve management of systems.

To reduce the management overhead involved in operating a Kubernetes cluster, Infinity Works proposed the use of EKS, using the AWS EKS Ingress Controller to deploy load balancers.

For continuous integration and deployment (CI/CD), TeamCity was initially selected because it was well-established within Starling Bank, with existing templates available. Docker containers are pushed to a self-hosted Quay.io container registry in order to provide container hosting and security scanning. While helm and Kube-client are then used to deploy new versions of the system to Kubernetes. As part of continuous improvements, these are now being migrated to pipelines-as-code.

For data access, Starling Bank wanted to keep the data layer uniform and selected the use of AWS RDS Postgres to provide a flexible SQL-based data store, while providing JSON features and integrations into data warehouse platforms.

Product feedback comes to the engineering team via customer service teams that collect feedback from customers, and ensure that the product is meeting their needs. In addition to this feedback, Infinity Works built extensive monitoring and metrics tooling into the solution using Instana to ensure that product decisions can be made using data. 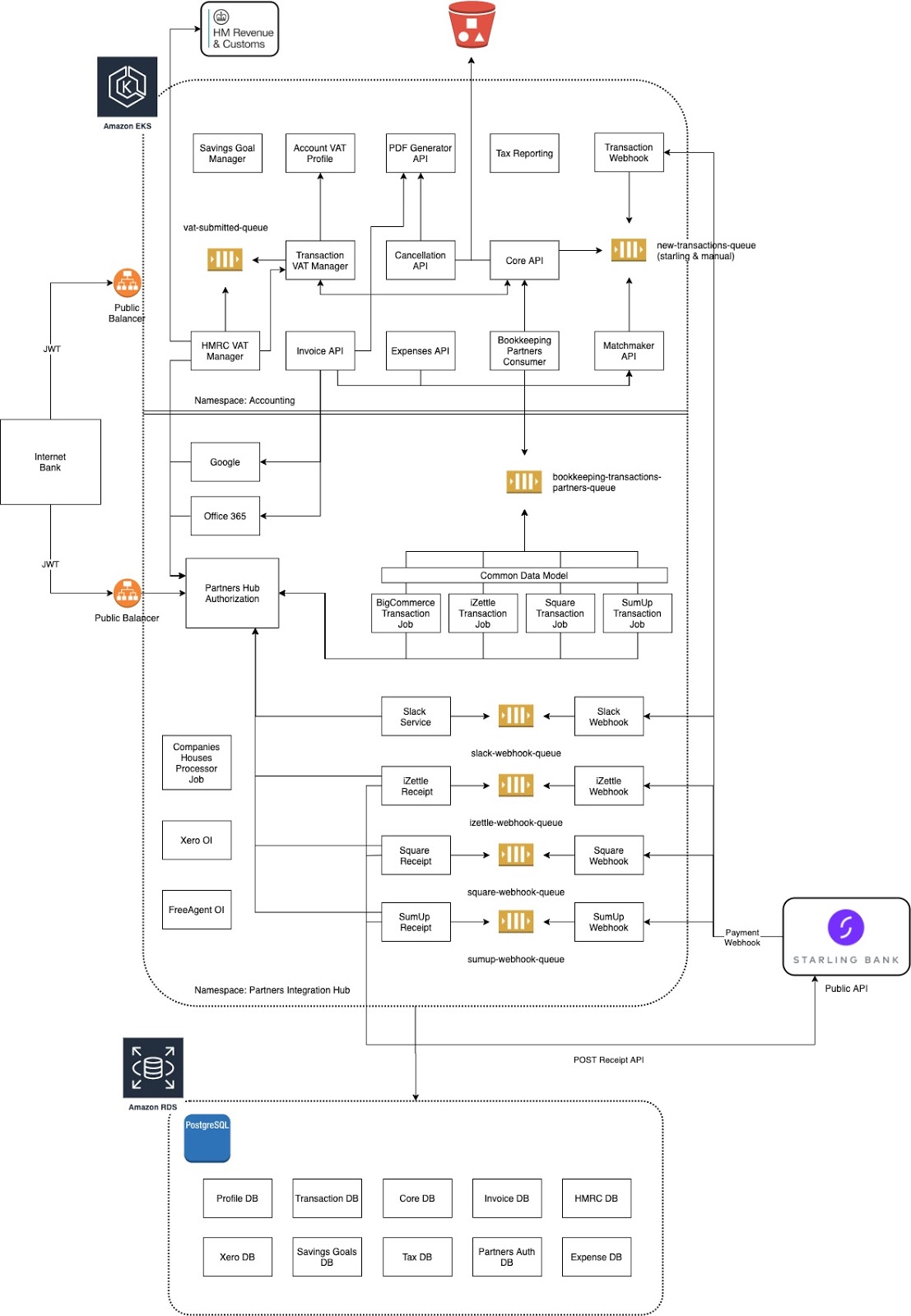 Starling Bank plans to improve the integration between individual microservices and their data warehouse platforms by making use of new cloud services provided by AWS such as Aurora Streams and Kinesis.

Infinity Works continues to work with Starling Bank to provide the service to more users, and to deliver improvements and enhancements to the product.